The January 6 Capitol Riot Was Not the Real Insurrection The January 6 Capitol Riot Was Not the Real Insurrection

As members of the House of Representatives gather to attend the hearing of the US House Select Committee to Investigate the January 6th Attack on the United States Capitol, one can’t help but wonder about the hypocrisy of the spectacle, especially in light of the Biden administration’s soft touch approach to the George Floyd riots that swept the nation in 2020.

As the pandemic raged during the summer of 2020, thousands of Americans took to the streets to protest, and in some cases riot, over the death of George Floyd, an African-American man who was killed in police custody.

Floyd’s death was a flashpoint in America’s growing racial and cultural divide, exacerbated by social justice activists who maintain that police in America are racist, and that their actions are enabled by systemic racism inherent in America’s culture, history, and its very foundations.

The riots saw over a billion dollars in property damage, according to reporting from Axios, but the true cost of the violence is even higher due to their impact on cities – not to mention the human cost and the destruction of anything that wasn’t properly insured.

Opportunists and looters ran amok in American cities, wreaking havoc on commercial districts – and even residential neighborhoods. Black- and minority-owned businesses in cities like Kenosha and Minneapolis were burned to the ground by rioters chanting ‘Black Lives Matter’ slogans, few of which have recovered.

In Seattle, Antifa and Black Lives Matter activists took over an entire neighborhood. Dubbing it ‘CHAZ’ (Capitol Hill Autonomous Zone) or ‘CHOP’ (Capitol Hill Organized Protest), the protesters sectioned off a portion of the city, turning into a police no-go zone. It was rife with crime. Several people, including minors, were shot and killed in the so-called ‘autonomous zone’. Several sexual assaults allegedly took place. Only one man was arrested over one of the fatal shootings a year later.

In the US alone, at least 25 people are estimated to have been killed while participating in protests and incidents related to the political violence that occurred throughout that summer. Retired police officer David Dorn was murdered on the streets of St. Louis while trying to protect a pawn shop. His death was a rallying cry for conservatives and supporters of the police who were tired of seeing the men and women in blue vilified for doing their jobs.

The impact of the George Floyd riots cannot be understated. It continues to reverberate throughout America as numerous liberal cities have moved to implement bail reform, defund police forces, and put in place legislation to hinder so-called ‘police brutality’ – effectively neutering law enforcement.

The nation saw a drop in police recruitment and rise in resignations, transfers, and an overall decline in morale. Cities like San Francisco, Chicago, Pittsburgh, Los Angeles, Seattle, Portland, and Minneapolis have seen spikes in property crime, violent crime, and carjackings as prosecutors refuse to try cases, letting felons back out onto the street with little more than a slap on the wrist. The shocking examples of victims falling by the wayside as violent criminals with extensive arrest records get away with racially-motivated assaults on whites, Asians, and Jews. Their crimes go unpunished while Joe Biden and members of his administration continue to rail against the threat of ‘white supremacy’ and wave around Transgender Pride flags, giving empty speeches about society’s apparently most marginalized demographic – trans people.

‘Move out of the cities’ has become a common refrain among conservatives who cite the destruction of America’s most prosperous and populous locales as a reason to embrace rural living outside of suburbia.

Cities, once the pinnacle of American culture, and home to monuments honoring the Founding Fathers, have become a sad parody of themselves. Crime goes unpunished, drug addicts litter the streets with needles, and homeless people set up camp right in front of the world’s largest corporations. In Seattle, Amazon was forced to shutter its downtown office due to violent crime.

At the height of the summer, innumerable statues were torn down, damaged, or removed by the cities due the racially-charged protests. Few were ever held responsible for the destruction of these historical monuments.

Despite the destruction and ruination of American cities, and the attack on America’s founding values, Democrats have chosen instead to not only ignore the riots’ cost to American lives, but champion the protests as a positive, progressive development.

Approximately $90 million was given to Black Lives Matter, and millions more have been spent on reshaping American culture through diversity initiatives in corporate boardrooms, civilian government, and even the military. The mayors of Portland and Minneapolis endured struggle sessions. Democrats took a knee in a symbolic gesture honoring Black Lives Matter.

When Democrats insist that the January 6 attack on Capitol Hill was one of the worst moments in American history, they’re ignoring the ongoing destruction of America and absolving themselves of their participation in it.

“The insurrection on January 6 was one of the darkest chapters in our nation’s history,” said President Biden at an event on Friday. Describing it as “a brutal assault on our democracy, a brutal attack on law enforcement,” the president insists that “it’s important that the American people understand what truly happened and to understand that the same forces that led to January 6 remain at work today.”

Biden is right about one thing – the forces that led to January 6 remain at work today.

To understand what’s going on, we have to look at how the January 6 riot was caused by a general sense of discontent with America’s downward trajectory. It was staged by a collective of Americans who refer to themselves as patriots, who are unhappy with the continued destruction of America and its values. When they raised their voices, they were mocked, silenced, and disenfranchised as traitors and conspiracy theorists – all this even before the events of that fateful day. And after that day, many were arrested – some of whom were forced into solitary confinement and stripped of their rights even to this day. They have had few defenders, and the legacy media remains unwilling to even speak of their plight.

If there’s an insurrection, it’s ongoing, and it’s seeing through the destruction of America’s core values. When all is said and done, the events of January 6, 2021 will be nothing more than a footnote in the history books. 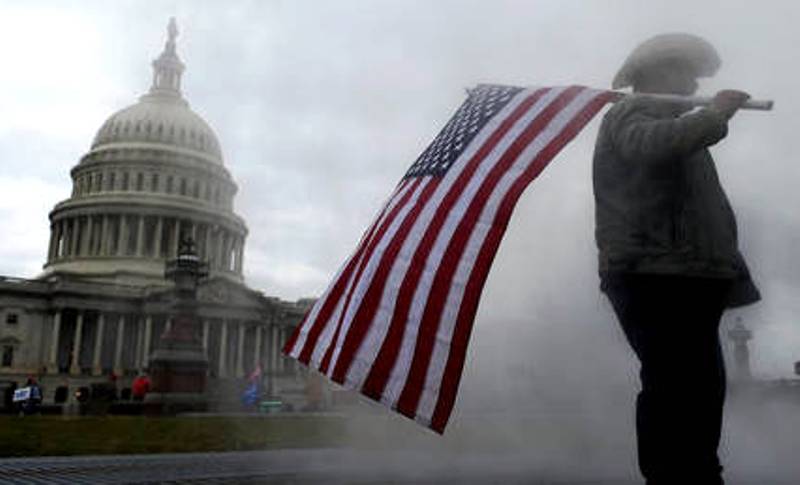