China launched its third aircraft carrier at the Jiangnan Shipyard in Shanghai on Friday morning. The vessel that has a full-load displacement of over 80,000 tons is the first Chinese aircraft carrier equipped with electromagnetic catapults and blocking devices like those used on US carriers to launch and land planes.

The technologies used in this aircraft – the second one fully designed and built in China – allow it to carry more aircraft as well as increase sortie rates and allow the planes to take off carrying more fuel and munitions, the Chinese media reported. The carrier might also be used by heavier early warning and cargo planes. According to the Global Times, the electromagnetic catapults mounted on the vessel can change their power output to match the needs of various types of aircraft.

The ship might be carrying China’s upgraded J-15 heavy fighter jets as well as a new generation of stealth fighter currently under development, which is expected to be called the J-35, the Global Times reported.

The Fujian also appears to be a step forward in comparison to the two other Chinese aircraft carriers. The first one – the Liaoning – was initially an unfinished Soviet vessel bought from Ukraine in 1998 and eventually commissioned in 2012 after some upgrades. The knowledge gained from working on it was used to build the second aircraft carrier – and the first domestically produced carrier – the Shandong which was commissioned in 2019.

Both have a displacement of around 60,000 tons and use the ski-jump aircraft launch system instead of the catapults. The Fujian, however, is still “a level behind” the most advanced American aircraft carrier, the USS Gerald R. Ford, which has a displacement of about 100,000 tons and is powered by a nuclear reactor. The US currently possesses only one such ship but a second is expected to be commissioned in 2024 and two more are under construction.

The Chinese ship is reportedly running on conventional power, but it’s only the second carrier in the world that uses electromagnetic catapults. It’s now expected to undergo some further outfitting work and will start mooring and sea trials soon after that.

The Fujian is named after a southeastern coastal province in China, which is closest to the island of Taiwan. This fact was noted by some western media, including the Washington Post and CNN.

The launch comes amid ongoing tension between Beijing and Washington over the fate of Taiwan. US President Joe Biden stated last month that the US would use its military to defend Taiwan if China invaded the island nation. The announcement was seen as a reversal of America’s long-standing adherence to the ‘One China Policy’, under which foreign nations recognize Beijing as the only Chinese authority. The US recognizes but does not endorse China’s sovereignty over Taiwan while supplying the island with weapons.

US Secretary of State Antony Blinken then retracted Biden’s statement but relations between Washington and Beijing have remained tense as the US approved a $120-million arms sale to Taipei. Taiwan has recently pointed to the threat of China attacking the island. While Beijing has repeatedly stated it would prefer a peaceful solution to the reunification issue but has not ruled out using military force either. 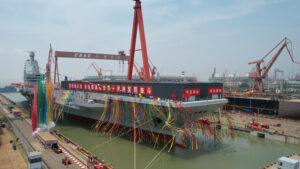 PrevPreviousReal Stories From Real People. The Devastation These Shots Are Causing to People’s Health Is Something We Will Never Be Able to Grasp Because of It’s Immensity
NextJ.K. Rowling Consents to Use of ‘Killing Curse’ on Ukrainian MissilesNext